You’ll win because you have ideas, and they only have fear.

It’s one of many razor sharp lines in “Other Desert Cities,” which is set shortly after 9/11 but could have been written after the 2016 presidential election.

The Actors Theater of Orcas Island presented opening night of “Other Desert Cities” by Jon Robin Baitz of ABC’s “Brothers & Sisters” fame. It is directed by Lin McNulty, and features Katie Zwilling as Brooke, Melinda Milligan as Polly, Tom Fiscus as Lyman, Indy Zoeller as Trip and Suzanne Gropper as Silda. The play premiered Off-Broadway in January 2011 and transferred to Broadway later that year. It was a finalist for the 2012 Pulitzer Prize for Drama.

Brooke Wyeth returns home after a six-year absence to celebrate Christmas with her parents, her brother and her aunt. When she announces the subject of her upcoming book, chaos ensues. Not everyone in the Wyeth family wants to open closed doors from the past. A cozy Christmas living room in Palm Springs is the setting, but the production plunges into heavy topics like war, grief, politics and how we cross the divide between generations, between belief systems, between parents and children.

Milligan nails her role as a vodka-swigging, Saks-shopping, aging Republican mother who says things like, “Sarcasm is for teenagers and homosexuals.” Fiscus plays an actor turned politician who is steadfast and good-natured as the anchor of the Wyeth family. Milligan and Zoeller, who are a mother and son in real life, have an easy rapport that is both loving and confrontational. Zoeller has some of the most clever lines in the play, and he delivers them with confidence and a smirk. Gropper contributes her outstanding comedic timing to the production as Aunt Silda. And then there is Zwilling, the eye of the hurricane. She brings layers to the character – Zwilling is earnest and determined and manages to make Brooke likable even in uncomfortable situations. She delivers quick, sparring dialogue with a precision that is a joy to watch.

The five actors are clearly integrated as a unit, and their argumentative, often humorous dialogue is timed well. While the roles could teeter on the edge of caricatures, this Orcas cast delivers down to earth portrayals.

Remaining run dates are Nov. 12-13 and Nov. 18-20 at 7:30 p.m. at The Grange. Tickets are $10 and available from Darvills, brownpapertickets.com, and at the door. On opening night, veterans are free. This may not be suitable for children due to language and content.​ 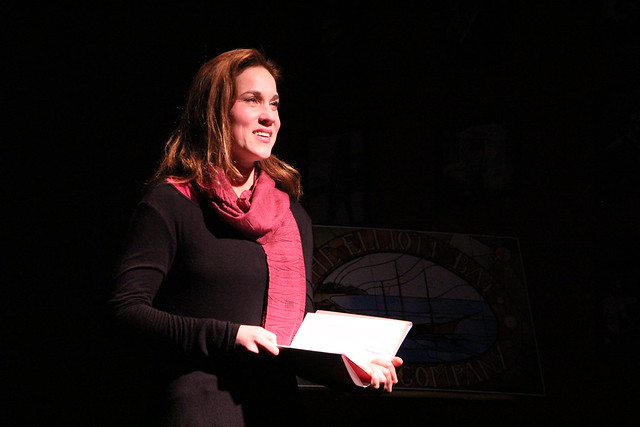